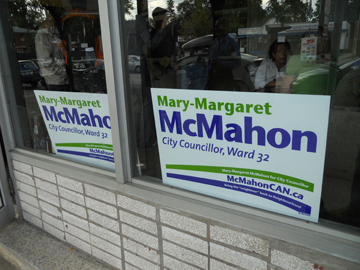 The sign you see all over the Beach, these days.

Bob Richardson and I did John Tory’s show yesterday afternoon, as a kind of wrap-up to the gruelling municipal election.

We genially disagreed on who will end being a winner and who will end up losing – Bob understandably felt one way about who will win the Mayor’s chair, John and I felt differently – but on one candidate we all agreed: Mary-Margaret McMahon is the only person who can (and should) defeat the detestable Sandra Bussin.

As I have suggested over the months/years – here and here and here – Bussin is easily one of the worst elected representatives I have ever encountered.  And that’s saying something.

Don’t split the oppositon and let the awful Sandra Bussin get in again: vote for Mary-Margaret.  She is a driven and decent person, and I cannot endorse her candidacy enough.  Bob and John feel likewise.