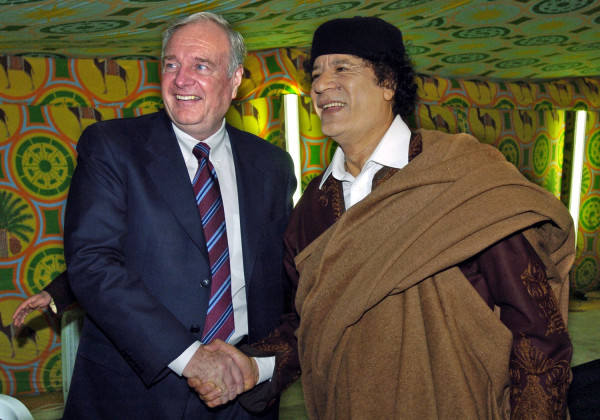 More than once in recent days, I have wondered why Paul Martin Jr., as Prime Minister, lavished so much attention on Muammar Gaddafi. Then, as now, Gaddafi was an an anti-Semite, a serial abuser of human rights, and a funder of terrorism.  Incensed by Martin’s decision to travel to Libya, I wrote the column below for the Post, asking why the Hell a Canadian Prime Minister had decided to give legitimacy to a dictator (and particularly since his regime killed a Southam News reporter, and was never called to account for it).

Anyway – Martin has been gone for years, but Gaddafi remains.  I don’t know what will be the outcome of current events – and, unlike a few of the current crop of instant-experts, I’ve even written a book about Libya – but one thing I do know: our collective cosying-up to Gaddafi helped him maintain his grip on power.  We bear some responsibility, indirectly or otherwise, for the carnage now taking place in the Socialist People’s Libyan Arab Jamahiriya.

Sometime after midnight on April 14, 1987, the body of a young Canadian man slammed into the pavement outside the entrance to the Zanzour Tourist Village in Tripoli, Libya. When found by a member of the hotel’s night staff around 6 a.m., the man was clearly dead.

The death, Canadians would later agree, was an outrage. Many believe it was murder. The bright young man was a reporter — an employee of Southam News, the news organization that preceded CanWest. And the reporter had been asking a lot of questions about Libyan support for terrorism. His name was Christoph Halens. He was only 32 years old.

The circumstances of Halens’ demise remain unresolved despite the passage of more than 17 years. Also unresolved are questions surrounding the enthusiastic support of the dictatorship of Muammar Gaddafi for a plethora of terrorist and extremist organizations in the years before and after Halens’s death.

Despite all this, Prime Minister Paul Martin plans to travel to Libya this week, following the trail of a number of other world leaders, to cozy up with Gaddafi. Why?

Halens was sent to Libya in 1987 to report on a “peace conference” sponsored by Gaddafi’s rogue regime. The Southam reporter discovered that invitees included representatives from the Irish Republican Army; the PLO; Canadian, British and American neo-Nazis, such as the Nationalist Party and the National Front; virulent anti-Semitic black nationalist organizations, such as the Nation of Islam; the American Indian Movement; and, oddly, the Canadian Union of Postal Workers.

Prior to the conference, the Libyan regime had more or less openly provided millions of dollars in support to an equally diverse cast of murderers, among them the Basque separatist movement, Germany’s Red Army Faction, the Abu Nidal organization, the Popular Front for the Liberation of Palestine, the Japanese Red Army and Black September. Even when a world oil glut pushed down Libya‘s annual petroleum revenues, Gaddafi boasted in November 1986: “We have increased our support … for all liberation movements throughout the world.”

According to the RCMP, Canada’s Foreign Affairs Department and Southam News, which conducted a rigorous investigation into the death of their employee, Halens raised the ire of the Libyan secret police when he started asking questions about Gaddafi’s involvement with neo-Nazis, anti-Semites and terrorists. (The notebooks Halens had been using all that week in Tripoli were never found.) He was murdered for doing his job as a journalist, in other words. That, certainly, is the view of his family, friends and colleagues.

Following an autopsy in Libya, Tripoli’s deputy district attorney responded to Canadian pressure by declaring that Halens had been “suffering from a psychological illness,” and therefore threw himself off the roof of the Zanzour Tourist Village. To its initial credit, the Conservative government of Brian Mulroney did not accept that absurd conclusion. The former secretary of state for external affairs, Joe Clark, told the House of Commons that the government was prepared to conduct a second autopsy. But eventually, Halens’ death slipped from the headlines and the government priority list. The mystery remains unsolved.

This would be a perfect time for Mr. Martin to demand the facts surrounding Halens’ death. But as far as any of us know, the issue does not form any part of the Prime Minister’s agenda. When asked about the purpose of the trip, one of Mr. Martin‘s chief spokesmen stated: “Given that he’s in the region, he wanted to meet with Gaddafi, as have so many other world leaders recently.”

Is that all it takes? We happen to be in the neighbourhood and decided to pop by? That’s not good enough.

If Canada is to enhance its stature in the international community as a defender of human rights, it should start by standing up for its own citizens. Mr. Martin must demand a full and frank accounting not only of Halens’ death, but also of the issue that brought him to Libya: the country’s support for terrorism and extremism.

Christoph Halens and his fellow Canadian citizens deserve at least that much.

[Warren Kinsella is a former Liberal party advisor and the author of a book investigating the death of Christoph Halens: Unholy Alliances: Terrorists, Extremists and the Libyan Connection in Canada.]