Paul Fromm and the Proud Boys: when neo-Nazis of a feather flock together

Paul Fromm is perhaps the leading Canadian far Right leader.  Fromm has decades of involvement with the Canadian organized hate movement, from the Edmund Burke Society to the Western Guard to the Heritage Front to a myriad number of white supremacist and neo-Nazi groups.  The Southern Poverty Law Centre tells us this:

From 1974 until 1997, Fromm served as a public school teacher with the Peel Region Board of Education. He was fired from his position after speaking at several Heritage Front events, one of which fell on Hitler’s birthday. A video of the December 9, 1990, event captured Fromm, in front of a Nazi flag, speaking to a crowd shouting “Sieg Heil!,” “white power,” “Hail The Order!,” and “nigger, nigger, nigger, out out out,” while performing the Nazi salute. He also hailed John Ross Taylor, a Canadian fascist, as a “hero.”

Fromm spoke at the “Students For Free Speech” rally in support of the Proud Boys’ “Halifax 5” at Queen’s Park on Saturday.  Incredibly, the Jewish Defence League were there providing security for the event.  (How they could not notice the presence of Canada’s most notorious Holocaust denier is beyond my understanding, but there you go.)

Anyway.  Below is a photo of Fromm at the event.  It makes clear that Rebel Media/Gavin McInnes’ Proud Boys are now openly associated with Holocaust denial and neo-Naziism.

It also suggests to me that all of this is going to get worse before it gets better. 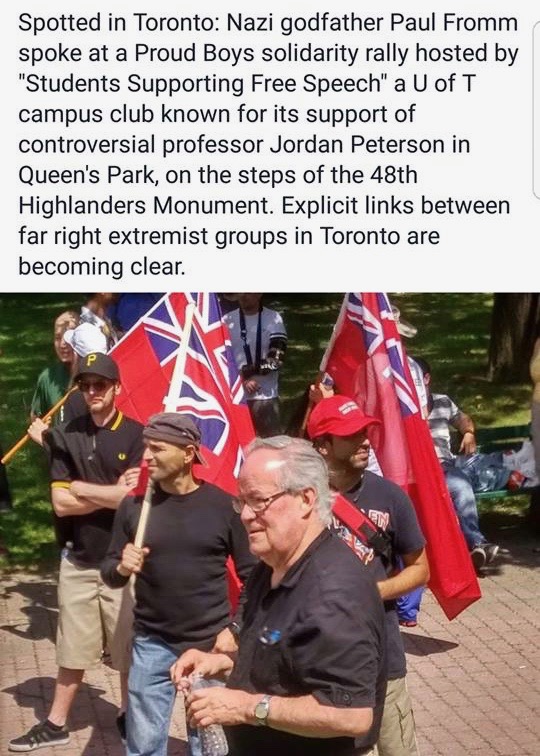