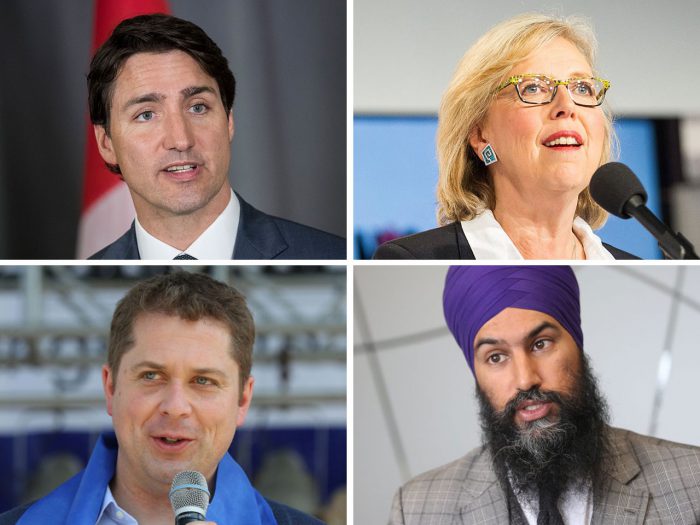 A new poll conducted by Leger for The Canadian Press suggests the governing federal Liberals have lost ground to the Conservatives over the past month.

Overall, 31 per cent of respondents polled after the federal budget was released Tuesday said they would vote for Justin Trudeau’s Liberals if an election were held now, a decline of about three percentage points from February.

That compared with 37 per cent who said they would back the Conservatives under leader Andrew Scheer, a one-point increase from February, while 12 per cent said they would vote NDP and eight per cent the Greens.

Scheer also jumped ahead of Trudeau on the question of who would make a better prime minister as the Tory leader got the backing of 25 per cent of respondents compared with 24 per cent for Trudeau, who has been struggling to contain damage from the SNC-Lavalin affair.

As for the budget, which the Liberals are hoping will help turn the page on SNC-Lavalin, 12 per cent of respondents said it was good and 19 per cent that it was bad, but 39 per cent said they didn’t really know about it.

OTTAWA — A new online poll conducted by Leger for The Canadian Press suggests the Trudeau Liberals haven’t convinced Canadians the country is doing better under their stewardship.

In all 46 per cent of respondents said Canada is doing worse since Justin Trudeau’s Liberal government was elected in 2015, while only 22 per cent believed the country is doing better and 27 per cent said things are the same.

Regional concerns particularly in Western Canada over the state of the oil and gas industry, are affecting the way voters are viewing the overall state of the country, Bourque said.

“In Alberta, for example, we see that 59 per cent of people believe Canada is doing worse, so there are regional issues affecting that overall number, but it is quite staggering,” Leger said.

Leger’s internet-based survey was conducted using computer-assisted web interviewing technology from Feb. 15 to 19. It heard from 1,529 Canadians, 18 years of age or older, who have the right to vote in Canada and were randomly recruited from the firm’s online panel.