A few days ago, Jon Latvis got in a bit of PR trouble. Anti-Racist Canada spotted a photo of Latvis, in full stormtrooper regalia, meeting with Toronto mayor Rob Ford. They sent the picture to me, and Ford and his staff ended up having (another) bad day.

Latvis, too. The guitarist for neo-Nazi band Rahowa was upset about the attention. He wrote me an email suggesting that the swastika tattoo on his arm wasn’t, er, a swastika.

Latvis also called the Sun newsroom, and they assigned a police beat guy to write up Latvis’ complaint. He was threatening to sue, the Sun guy told me. Let him sue, I said. You need a reputation before you can sue for damage to it, I said.

Latvis was delighted by the resulting story, I am told, and I could see why. He was basically permitted to lie his face off, and also claim that he didn’t know what Rahowa was singing about during the many years he performed with them. He denied being an anti-Semite and a white supremacist, too.

So, the good ARC folks got to work. Their posting is found here.

Personally, I still think a picture is worth 1,000 words. In Latvis’ case, the pictures below also eliminate any doubt whatsoever about who Jon Latvis really is, and what he stands for. They also make clear he’s a liar and a creep.

So, sue away, Latvis. I’m bored, at the moment, and need some entertainment. You’ll do. 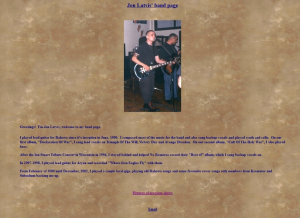 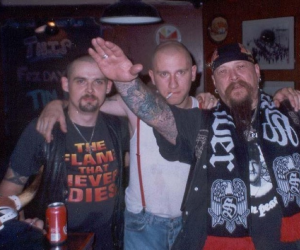 Latvis, left, with Nazi skins at Tri-City show in 2001. Look like a fascist salute to you? Me, too. 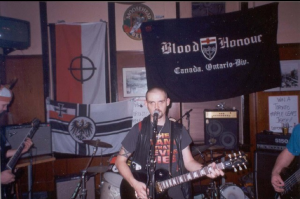 Latvis onstage in 2001. Blood and Honour is an international neo-Nazi music network.  The Celtic Cross above his shoulder signifies racial separation.  It’s also the logo for Stormfront, the biggest global hate site. 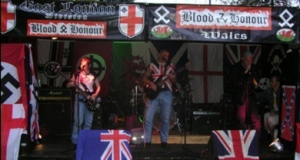 The view of the stage at a gig Latvis performed at in 2005. That’s a swastika on the left, of course.