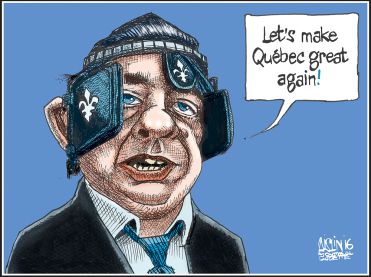 During one of the more-recent debates, last Fall – when controversy was raging about “Liberal” government’s bill that would force women to remove veils when getting on a city bus, or going to see their doctor – Francois Legault, the leader of the CAQ, was asked about the decidedly-unsecular symbol hanging above his head in his workplace.  Legault shrugged.  He said the crucifix should stay. “We have a Christian heritage in Quebec and we cannot decide tomorrow that we can change our past,” said the leader whose very party name is about Quebec’s future.  “I don’t seen any problem keeping it.”

Therein lies a problem, of course.  Legault is no longer a mere member of the opposition in the provincial legislature.  In a few days’ time, he will be Premier of Quebec, presiding over a massive majority in the National Assembly.

At his very first press conference after the election, then, Legault dispensed with any notion that he would be the Premier of all Quebecois.  To the Muslims (with their headscarves), and the Jews (with their kippahs), and the Mennonites and the Amish (with their traditional styles of dress), and the Hindus (with their tilaka markings on their faces), Legault’s message was plain: I don’t represent you.  I don’t care about you.  You are second-class citizens – or worse.

Here’s what he said, at that first press encounter: “The vast majority of Quebeckers would like to have a framework where people in authority positions must not wear religious signs.”  And then, knowing what he wants is wholly contrary to the Charter of Rights and Freedoms, and every human rights code extant, he went even further: “If we have to use the notwithstanding clause to apply what we want, the majority of Quebeckers will agree.”

From the man who said he would march newcomers to the border who lack the ability to properly conjugate verbs, and expel them – to…where? Cornwall? Vermont? Newfoundland and Labrador? – we shouldn’t be surprised, one supposes.  Francois Legault has already revealed himself to be another petty, pitiful aspirant to Maurice Duplessis’ throne.