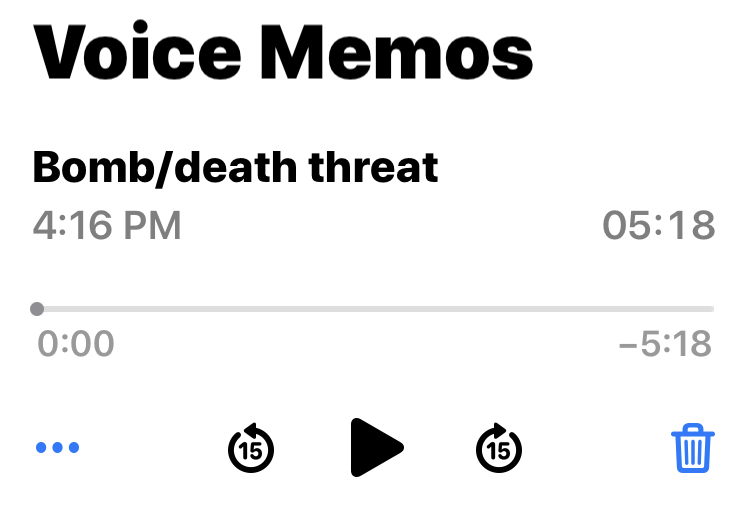 Daisy Group bomb threat: do you recognize the guy threatening to kill us and the police?

This afternoon at Daisy Group, right after this, one of my staff received a bomb threat.

We evacuated everyone at Daisy, and let our neighbours know, as well.  We waited on the sidewalk on Bloor West. The police came and, as I was going through the building with them, looking for anything that shouldn’t be there, another one of my staff got called by the would-be bomber on his personal cell phone.

The police sergeant encouraged me to talk with this guy, while we taped it.  On the recording, you’ll hear him claim to be a member of the neo-Nazi Soldiers of Odin – but he’s a liar.  The SOO would never claim responsibility for a bomb threat, or make a threat to kill police when he knew they were listening in.  And he didn’t even know the name of the founder of the SOO – and every member knows that.

As you can hear on the tape, however, he knew some details about us, and he sounds determined to cause damage.  It was his demands that were most revealing – that I go on TV and admit that we were paid “foreign actors” (that typically means Jews) – to disrupt the People’s Party campaign.

CBC won’t cover this, of course, because they’re far more interested in depicting the racist PPC as victims, or writing about our personal lives to hurt us, after pretending to be sympathetic. But it’s obvious to us, at least, that a PPC supporter made the threats against us and the police.

And, as a result, this coward showed why – better than we ever could – Daisy Group was right to work to defeat the extremist People’s Party in the election.  Which some people have told us we did.

If this guy’s voice sounds familiar to you – or the odd phrasings he uses (“kleptocracy,” “foreign actors,” “Nuremberg Laws,” etc.) – you can contact me via warren AT daisygroup DOT ca, and I will pass it along to the police officers who are handling this case.  Thanks.

The recording is here: