This is what greeted Lala and me when we made our way up to the cabin for the first time this year. (I’m always the first on my lake, I’m told.)

Rounded the corner and – holy shit la merde – an 80-foot tree had fallen. And missed the place by inches. (It almost took out the Scott Reid Memorial Porch, in fact!)

The tree did a number on a little cord of wood, but it missed slamming into the place, and for that we are grateful. Buying a lottery ticket when we get back to the city. 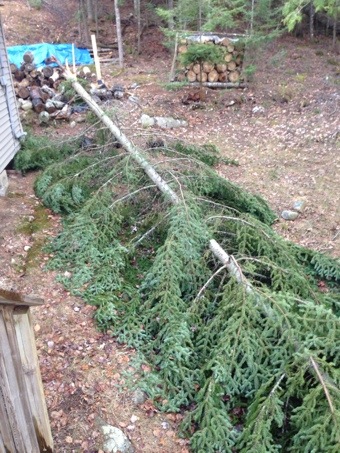 On a typically cold January day, the man steps into room 727 at the hotel, which is located right downtown. He has come there, a bit reluctantly, at the request of his former girlfriend.

He wants to have sex, she doesn’t. So they lounge on the bed, reminiscing about old times. He asks her about sex, and possibly having sex with her travelling companion, too. “Does she mess around?” he asks.

She thinks he is asking about drugs, not sex. “She has some,” she says. “Yeah, sometimes. She doesn’t do a lot. She toots [cocaine] more than she’ll do anything else.”

“Mmm,” he says, absent-mindedly, then adds that he doesn’t “have anything.” He asks her: “What about you?”

She goes to the bathroom, and finally returns with some crack. They urge each other to go first. She demurs, saying the crack would make her too “hyper.” After a moment or two, he takes two long drags on the pipe. He then puts it down and reaches for his coat.

“Let’s go downstairs and meet your friend. Come on,” he says. And – just as he is calling his security detail, to tell them that he is ready to leave – men carrying guns swarm into the room. They grab him and put him in handcuffs and read him his rights. He, the mayor of the big city, is going to jail.

It is, instead, what really happened on January 18, 1990, at the Vista Hotel – now the Westin – in Washington, D.C. The woman was Hazel Moore, a former addict who found religion and became an FBI informant. He, of course, was Marion Barry, mayor of Washington, D.C. Caught on a grainy, black-and-white video, smoking crack cocaine.

Everyone in the world, pretty much, would later see the video, and marvel. Lots of editorials and letters-to-the-editor would be written, none of them particularly complementary to Marion Barry. Because the police in the United States don’t mess around about these things, Barry would be charged with counts of perjury, and drug possession, and conspiracy.

He continued as mayor, however. Shortly before Election Day in 1990, Barry was sentenced to six months for one of the drug possession counts. He served his time, and was released from a federal prison in April 1992.

A few weeks later, Marion Barry filed papers to run for a city council seat. Guess what? He won. And he’d go on to win again and again and again – as a councilor, as mayor. He won even when reports started to circulate, yet again, about cocaine and other drugs being found in his possession.

Politics is war without bloodshed, someone named Chairman Mao once said. Journalists come down from the hills after the battle is over, someone named Murray Kempton once said, and shoot the wounded. Politics, with its war rooms and whatnot, is replete with metaphors about war and killing.

The people, meanwhile, are apparently more forgiving than politicians or journalists. They have a better understanding of human failings. They are wired differently than the hacks or the flaks. The people get weary of all the political bloodshed, and all the shooting of the wounded. They forgive and forget.

Something to think about, as the madness and the mayhem continue, unabated, here in crazy town.

Something to think about. 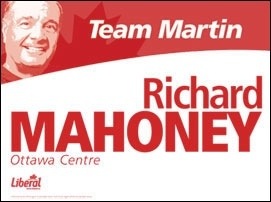 Getting lots of new followers

…must be an election or something. 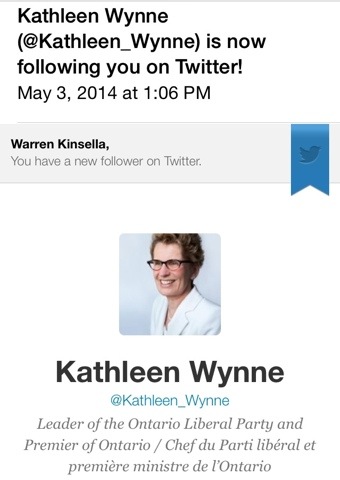 So much for my predicting ability 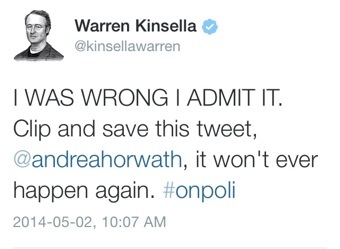 More than 200 girls abducted, and no one seems to give a shit

Why? And, while we’re on the subject, why hasn’t the West gone in there, to get them back?

“At heart, the real Rob Ford is a racist, sexist, homophobic pig.”

That’s from the Toronto Sun, people. THE SUN.

Penned by my Carleton J school friend, Michele Mandel. Here it is, for you to save and show your kids. 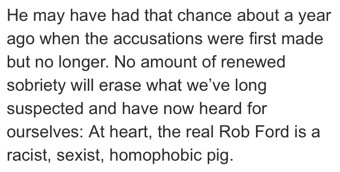 Highly scientific poll: what should Rob Ford do?

In difficult circumstances, my answer is always number five.

(In all seriousness, however, I’d love to hear your views about what you’d do if you were advising Rob Ford. Hard to imagine, I know, but he was looking for an advisor, just yesterday afternoon!)